Some folks find solace in the woods, some shopping on fifth avenue. Most of us Hollands! find refuge at the beach. So, spending a month winding up and down the coast of Florida was nothing short of pure bliss. We started in the Panhandle at Pensacola Beach, making our way south to Naples, ducking down to the Keys all the way to the Southern Most tip of the United States, then back up the Atlantic side through South Beach, Melbourne and finally St. Augustine.

Each Florida beach is as different as the grains of sand, each showcasing their own unique beauty. Our favorite beach along the panhandle was Pensacola Beach and if it had been warm enough we probably would have been there everyday. Unfortunately, it was in the 60’s and being north on the gulf meant the water was not much warmer. However, we couldn’t resist throwing on a sweatshirt and sitting seaside, enjoying the emerald-green water, and fine pearly white sand. And, the bonus of Pensacola Beach is that you have access to the shallow calm waters of the Bay and just an eighth of a mile on the other side of the island was the rolling waves of the Gulf. So depending on your mood you could go from one side to the other in a single day. 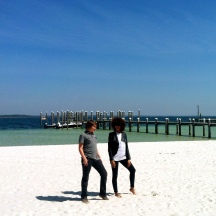 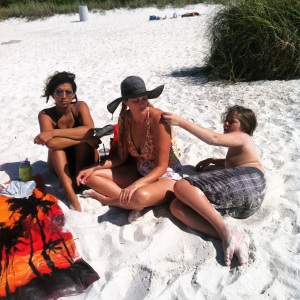 Our favorite beach in Naples was Clam Pass. It’s $8 to park but they had little gulf cart trolly’s that took us to and fro, starting in the parking lot and ending at the cafe/beach. They had lawn chairs/umbrella’s for rent but we preferred to just take our own supplies and walk down the beach setting up right at the mouth of the pass. The cool thing about this beach is that if its low tide you can hunt for hermit crabs and clams and during high tide the surf is perfect for body boarding. Plus the water is actually warm. On a side note, we’re sand snobs, and prefer the soft powder. Clam Pass with its slightly grainy sand mixed with shells, just makes the cut.

Having never been to the Keys and only seeing photos, we weren’t sure what to expect regarding the beaches but we did know that the water was a crystal clear mix of emeralds and blues, so that alone drew us down. However, once we arrived we realized that our ideal of a sandy beach wasn’t going to be met. Rather, we would find delight sitting by the water on a grassy patch to catch a sunset at our campground on Ohio Key or swimming directly off the dock. The waters were calm, and warm which offered the perfect scenario to bring out the blow up raft and lounge in the water all day long. We still longed for a proper beach day and found that Bahia Honda State Park appeased our desire enough by offering a little strip of sand/shell mixture to plop our beach chairs and umbrella on. Most of our time there was spent floating in the knee-deep water. On the actual island of Key West, we parked down near the docks and walked the mile across the island to Higgs Beach to take a quick dip in the ocean and cool off. It’s a small city beach with a long jetty for people to walk out on. The sand was simi soft and the water pretty clear consider how many people were swimming. We were delight by the large demographic of beach goes and specially made note of the unique swimwear at the beaches in Key West. 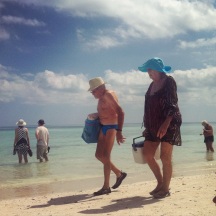 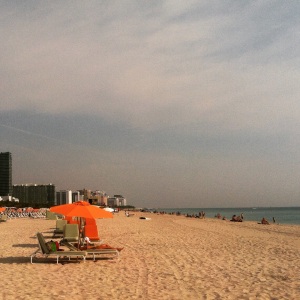 South Beach, Miami rocked! The water was warm, waves were light and fluffy, and the sand was soft yet grainy with yellow hues.  It’s a city beach and has all of the fixings  of a scene straight out of CSI Miami minus the murder. There were umbrellas, cabana’s, restaurants, and bars all up and down the coast line. With the hustle and bustle of city life all around us, this beach was very reminiscent of Bondi Beach in Sydney, Australia. We only got to spend a short morning visiting to this beach and would definitely make it more of a priority next time around.

If you’re looking for the surf, Melbourne is the place to be in Florida. Satellite Beach to be exact. Our son loves to surf and had he more time and known someone with a board, he would have loved for us to hang here a bit longer than we allowed. The sand was grainy and the water was cold but the waves were epic. It wouldn’t be where we would want to spend a whole day camped out watching little ones build sand castles but for the purpose of getting in and riding some waves, this beach fits the bill. The only draw back for us was that besides the beach itself, kinfolk in the area and a little burrito stand called Da Kine Diego’s Insane Burritos, Satellite Beach seemed to be lacking in cultural draw. There was just one long double lane road that ran the length of the peninsula and had strip malls or condo’s on either side. We’d go back but probably only to hang with our kinfolk who happen to live there in the winter months.

St. Augustine as a destination was probably our favorite. Everything about the area, the history, quant little town, and the beach was fantastic. Unfortunately, we only had one night in St. Augustine. We camped at North Beach Camp Resort, a privately owned RV Park. The sites were a bit above our price range but we were thankful for the opening specially since it was Easter Weekend. The resort was like something out of a Fantasy Island episode, with beautiful live oaks enclosing each site, a pool, shuffle board, restaurant beach side as well as a restaurant river side. The beach was similar to Melbourne in that it was cold and the sand was grainy, however the waves had a gentle crash to shore and was perfect for sea shell hunting. Ideally, we’d hit this one again. Maybe they’d be up for a barter. We’ll do a concert in the park for a week of camping. Wouldn’t that be something! If we could, we’d probably go back to most of them but if we had to pick only one we’d probably pick Pensacola Beach or really anywhere along the panhandle. We’d probably wait until late April or May to visit this area just to give the water a bit more time to warm up. Have you been to Florida? What were your favorites?