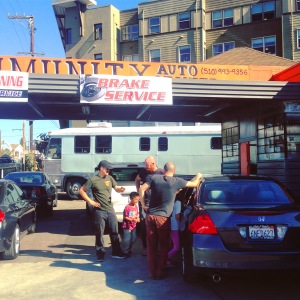 It has been four years since our last roll down the west coast and we were excited to reconnect with some of our kinfolk Oakland, California. We were meant to park our bus in the Bekaert’s driveway but found that the already tight squeeze was made impossible by surrounding parked cars. Nic had a “Plan B” for us to park with a friend down the street who owned an auto shop. We were super grateful for the hospitality but the initial let down of not being next door to our friends, on top of trying to get remember our city street smarts, left us a bit unhinged. All that to be said, after the first day, we found our bearings and started to engage with the colorful world around us. 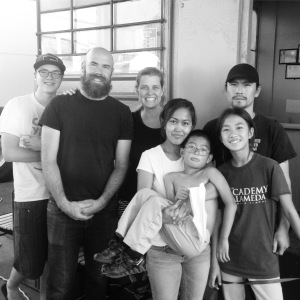 We began our week by making scones and tea for our host, Tane and his wife, Keo as a thank you for allowing to park in their lot. Over the course of the next few days, we visited with them several times, sharing story and encouraging one another.

Tane, shared a bit about his hard road growing up in Oakland. He said his life was consumed with anger, with self and he had very little hope. Then, he had a moment where time stood still and everything came into focus. He was riding in his car and flipped on the radio to a station where he heard a sermon about God’s forgiveness through Yeshua. Forgiveness was not a word that was familiar or comfortable for him. However, in that moment, it all began to sink deep into his being and he knew he needed this forgiveness and he knew he needed to offer this forgiveness. And so he began to move towards this truth, one step at a time. He talked about how this forgiveness transformed his mind, strengthened his marriage and family and gave him a vision for the future. He was a top end mechanic, working at a dealership and had always wanted to start his own business. So, he and his wife began to pray and things started lining up. In May, they bought the mechanic shop on the corner of Foothills and 27th. They call it Community Auto Center, a name that symbolizes everything Tane and Keo are about; community.

We also had inspiring conversations with Keo. Born in Cambodia, fleeing as a child during the war, Keo shared the journey of faith that led her towards healing and reconciliation. A part of that journey was a trip back to Cambodia with a handful of other Cambodian women. The trip offered the ladies an opportunity to reconnect with culture, to heal past wounds, to encourage and be encouraged by their families and fellow Cambodians in the reconciliation process. This process requires deep lament and also a movement towards Thanksgiving. In his book, Out of the Depths, Anderson suggests that “laments are really expressions of praise, offered in a minor key in the confidence that Yhwh is faithful and in anticipation of a new lease on life.”

Though out the week we had non-stop visits from many of Tane and Keo’s friends and neighbors. We found that in many of their stories, as refugees, that they are still actively living out lament, stuck in a posture of deep sadness and for some, anger. Having been to Cambodia and experiencing the subtle transition from lament to thanksgiving amongst the locals that we met, we were able to participate in active listening, allowing the speaker to really confess the horrors, pain, and sense of betrayal they still feel bound by in their lives.

Yet, when they learned of our visit to their homeland, light-filled their eyes and they wanted to hear a new story. It was awesome to be able to encourage them by telling them stories of our friends, their fellow countrymen, who have walked through the same horrors of war and who continue to live in a hostile world but who have hope. We shared stories of those who, through the power of forgiveness have begun to mend relationships with those who once were their oppressors. We shared stories of those who live out this hope by loving God and loving their neighbors. Thought it all, some of them were inspired to begin to move towards healing, towards forgiveness, Thanksgiving, and hope.

We travel full time, all over the world, we sit with people and listen to their stories. If nothing else, we are finding that the further we go the more these stories interweave. There is a tie that binds us all in love and it is an honor to carry these stories for such a time as this. It is an honor to be welcomed in as the stranger and find such rich treasures waiting for us.

If you’d like to learn more about Cambodia’s recent history with genocide and war we highly recommend the Netflix movie, They Killed My Father.

During our visit to Cambodia, we spent much time with Craig Greenfield and the Alongsiders, learning and listening. We visited the Killing Fields and asked anyone who was willing to share their story.  We were struck by our new Cambodian friend’s tenderheartedness, sober-mindedness, and their joy. We were encouraged by their commitment to making their world a better place by serving one another, caring for the hungry, the wounded, the warring, and the dying. While there we learned a sacred song, one that resonated so deeply in our souls that we have carried it with us and share it with those longing for healing and restoration in our world. It is a song that was actually written by a Mennonite named Tom Wuest, who visited the Alongsiders prior to us and was so inspired that he wrote a whole album of sacred songs. This was one of them. It is called May Your Kingdom Come and it is a prayer based off of Yeshua’s prayer;

9 …Our Father which art in heaven, Hallowed be thy name.

10 Thy kingdom come, Thy will be done in earth, as it is in heaven.

11 Give us this day our daily bread.

12 And forgive us our debts, as we forgive our debtors.

13 And lead us not into temptation, but deliver us from evil: For thine is the kingdom and the power, and the glory, forever. Amen. (Matt 6.9-13)

One thought on “Carriers of the Story”