In 2010, Kara Counard started coming regularly to our local shows in Northeast Wisconsin. She would show up with her son, friends and a handful of brightly colored hula hoops. Her spirit was humble and as she engaged with our music, a joy would permeate through out the venue. If there was a show where she wasn’t present, we would all make note afterwards, stating that we missed her dancing and jovial hooping. At a certain point, I remember approaching her and declaring how much we appreciated her presence and noted her commitment as a “fan” but that we were keen to share community and story with her and wanted her to be our friend. She shyly agreed to joining us for dinner on our patio one summer evening and that was the beginning of our dear friendship.

Besides being an excellent hooper, Kara has a natural gift and honed talent as a professional photographer. In fact, her eye is prolific, capturing not only the perfect composition but seeing and embracing the light that makes life look absolutely beautiful.

At the beginning of 2015, a conversation began about her desire to ride along on the Hollands bus, as a photo journalist, documenting life on the road. This spring she flew to Asheville and rode with us for a solid week, camera in tow. She chronicled intimate family time, exploring Asheville, a house concert in Pittsboro, historical Richmond, and a beach day in Virginia Beach.

Prior to Kara’s arrival, our son, Banjo, had developed a desire to try his hand at photography. He had been researching camera’s for months and hoped to purchase one for his 14th birthday. So, while Kara was on board, he really sought her expertise on the subject, discovering even more information about brands, lenses, and the art of photography. 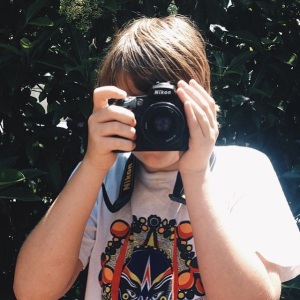 A few days into her time with us, her camera started acting up and we had to visit a camera store. Although it was unfortunate the problem was solvable and she had a rented camera within the hour. Her inconvenience ended up being a blessing in disguise for Banjo, as the forced visit to the camera store accelerated his purchase and he walked out with a used Nikon D90 and 50 millimeter lens. Immediately the photography lessons commenced and before the day’s end, with Kara’s guidance, Banjo conquered the Nikon’s components, ready to practice honing his “eye.”

It’s been a blast watching him explore his new-found love, especially with his sister, who is always looking for a photographer for her Dutchygazelle Blog. Big thanks to Kara for taking time away from family and friends, for honoring us with her amazing gifts and talents and for being our friend! 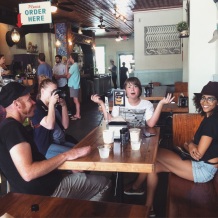 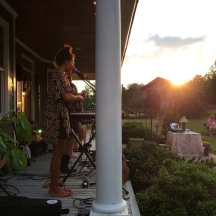 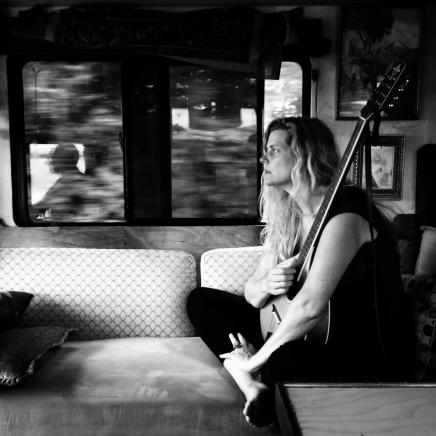 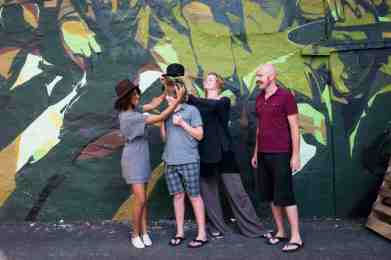 We met Dustin and Marcia Price two years ago when we showcased at the Southeastern Folk Alliance conference and kept in touch with them over the years. When they heard we were coming back through Asheville, they invited us to come and park in their flat driveway in Candler, a suburb just west of downtown Asheville. I say flat, because, it’s probably the only flat driveway in the Asheville area, which sits in the Blue Ridge Mountains. Their new home is positioned perfectly and allows for breathtaking views that overlook downtown and the surrounding mountain range.

We pulled in on a sunny afternoon, settled in and shared a meal and story that evening. We learned about their five year adventure in China and the transition back to the US. We learned about “group culture vs individual culture,” as well as, testimony about faith in China. It was inspiring to sit with them and learn, hear their story of meeting in college, while Marcia was over from Brazil, taking visa’s, house remodel, and their excitement as they were preparing for the arrival of their new baby, Esther.

One of the best thing about staying with a host family is being able to jump into life with them, exploring their tastes, likes and dislikes. And, with a sunny day on our hands, the first order of business with the Prices was to take a drive in the convertible. They decide to trek down to the new outdoor outlet mall for the grand opening. As we pulled in, the long line of cars & police directing traffic fostered a sense of excitement for this segment of the local population. We hoped on board and rode the wave, enjoying an afternoon sitting in the outdoor plaza watching people walk by, checking out the Asheville flare. 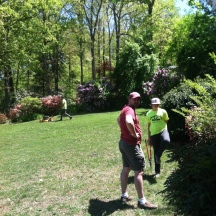 On Saturday morning the fella’s joined Dustin and did a bit of yard work while I worked on a blog. In the afternoon, we all went downtown Asheville to explore Lexington Street. Graciana and I stopped in to have tea at Dobra, enjoying a refreshing house made chai and some sweets. That evening we shared dinner, more conversation and later the fella’s went to a friends house to watch the Mayweather vs Pacquiao fight. Craig and his handle bar mustache fit right in, as most of the fella’s there were sporting their mountain beards. All in all, it was a night of men being men. 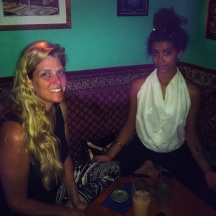 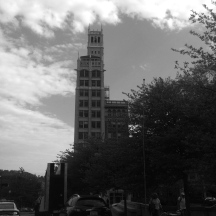 On Sunday we went to church with the Prices and a few of their friends and after shared a meal at a local favorite, Rocky’s Hot Chicken shack. The menu featured Chicken and Waffles with different levels of heat intensity. At face value, we’re foodies and especially focused on organics, so the Chicken Shack wouldn’t have been something we would have though to stop at. However, the joy of someone else taking you through their list of best eats is more adventures to us than sticking with our comfort zone. And, as it turns out, we we’re all pretty smitten with Chicken and Waffles. The combination of sweet and super spicy really worked. 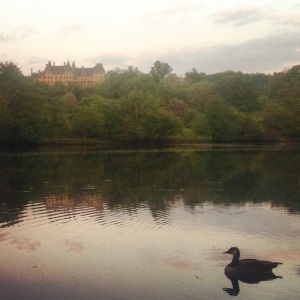 Another fun adventure, was a night out at the Biltmore. At $40 a ticket we could have never afforded to enter the grounds of this robber baron castle, but the Prices had a membership that allowed us to go onto the grounds and enjoy a wine tasting in the Winery that sits down the hill from the house. We spent about an hour and a half tasting the Biltmore wines, which were average but the conversation and joy of being with friends was priceless. Later we explored some of gardens and grounds, catching a back view of the castle and snapping a few photos. We finished off the night at Pour, a local bar on the up and coming east side of Asheville. The bar was unique in that it had over 80 beers and 12 wines on tap, we each got a wrist band with a fancy computer chip that allowed us to fill our glasses as much as we wanted with any of the beers or wines on tap. The computer chip calculated our total ounces and payment was taken at the end. 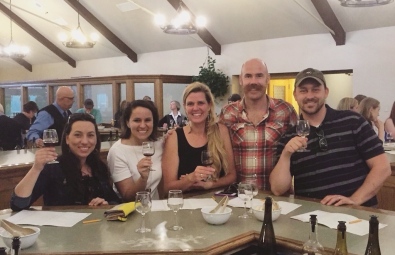 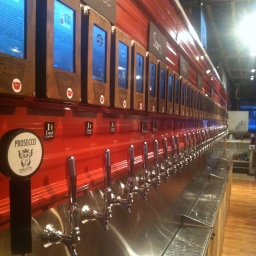 Our hope as we travel is to experience local like and neighboring with the Price’s offered us a wonderful chance to explore Asheville!  It is the little nuances and insider knowledge that is priceless to us, as well as, the joy of being in community, unshackling from bias and allowing for a deeper flow of relationship to transpire. We are so thankful for kinfolk like the Prices who allow us to come into their world, try new things and be inspired by their zest for life.