Over the past week we have lectured on Australian Folklore about 16 times, in a variety of settings including nursing homes, a mental health facility, Alzheimer unit, retirement communities, a high school and a community college. The range of settings offered some challenges but with a back ground in music therapy we were able to shift into more song than story when needed.

The humanities course is grant funded program, through the Coffeyville Community College in Coffeyville, Kansas. They have weekly lectures on history, folklore, story and song in all facets of life, depending on the lecturer. In a rural, southeast corner of Kansas, Caney High school and the surrounding nursing facilities all benefit from this program.

Craig was the primary teacher for our program on Australian Folklore. It was a joy to be able to watch him research and prepare a lesson that emphasized so much of his history. Starting with Aboriginal “Dream time” stories and an a-cappella song we learned from an Aboriginal/Australian group called ‘Tiddas” to the first convict ships from England and then finally stories of the bush life as documented by Henry Lawson and Banjo Paterson. We sang Bound for Botany Bay, My Bonnie, Waltzing Matilda, our own Immigrant song and Old Man’s Town.

The kids joined us for the Community college and High School sessions, which totaled seven sessions in all. They were a great accompaniment, adding wonderful harmonies and a steady beat on the cajon’. Our son even read a few of the poems for the high school classes.

At one of the nursing home facilities I had an intense and profound moment as I  listened to a woman in her forties share her story of regret. She was a jolly woman and was singing along with gusto, so impressed with us she asked for our autograph. I said sure, if we could have her’s in return. She was excited and said she’d be happy to give her autograph to us but she was legally blind. However, she wasn’t always legally blind, only for the past 12 years. I responded with an “I’m sorry” and an affirmation of hope and planned to continue on in song. She interjected with a mumbling of a woman who beat her nearly to death and tried to gouged her eyes out. She said the woman only got 12-15, should have gotten life, but only 12-15 and then she got out after 6 on good behavior. I was shocked and caught off guard. I touched her arm and then she began to crying, “I made a big mistake misses, a big mistake. Have you ever made a big mistake, only to regret it the rest of your life?” I had made plenty of big mistakes but none that left me with blindness, mental delay and a huge scar on my chest.  I answered, “yes” and stuttered another “I’m so sorry.” She continued, “I had an affair misses, it was the worst mistake I ever made. I miss my husband, and my kids. I want my old life back. I want to see my kids. I want my old life back.” I really don’t remember how I responded but it was something in reference to having her old life back, something along the lines however painful, trying to embrace her new life, trusting there was a purpose for her pain and to begin to look for joy in it. I don’t know, everything coming out of my mouth all sounded so ridiculous, so inadequate. But she was gracious with me and after we spoke she smiled really big and said she felt inspired and encouraged. She was thankful for my listening ear. I thanked her for sharing and we continued in song, with “In the garden” followed by a string of old timey songs about “flying away.” Later, we exchanged autographs. Her’s said her name and “Blessing to you.” 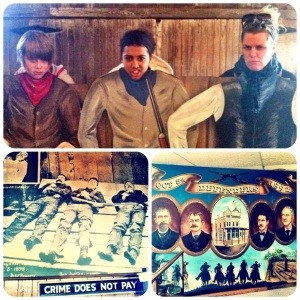 On friday we explored a little bit of Coffeyville’s folklore and visited the Dalton Museum. We learned about the history of this area and the resilience of the towns people in bringing down the notorious Dalton gang. It was fascinating to learn about the Dalton brothers pre-out law jobs in legislation and as a sheriff, the shift in their thinking and the final plunge into criminal life. It was their last hit before they were going to head to Mexico and retire. How ironic. They went in to the town of Coffeyville with an air of superiority and found out the hard way that “Pride comes before the fall.” All were gunned down except the youngest Dalton, who was imprisoned for 18 or so years and went on to  later wrote a book about the out-law days.

All in all, the week was pretty quiet, peaceful and we were able to catch up on some much-needed rest with early nights in the RV park. It was a balmy 68-80 degrees all week and for our past time we went pecan hunting and foraged a nice little stash that will hopefully turn into pecan pie.