If you are on FB, find our conversation at “Jana Holland” I will be going LIVE at 8pm (est) June 6. So excited to hear from @gracianaholland, @therealchriskaz and @joshua__beightol !
Listen, Follow, Support @gracianaholland 🌻 If you click on Graciana’s name it will take you to her profile where you can hear the full song.
#blackouttuesday
Jan 8, 2020, in a taxi on the way to the Athens airport. Craig, Banjo and I flew to Aust, but Graciana went on to the US. This was the last time my precious daughter rested on my shoulder. There’s nothing I wouldn't give to be by her side right now. Feeling all the feels. Her life matters. #blacklivesmatter 🙏🏾 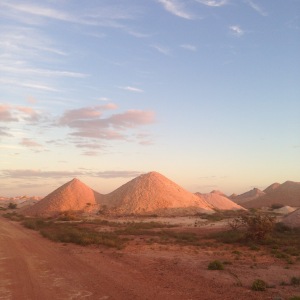 Upon first appearances, Coober Pedy, South Australia, feels like a post-apocalyptic scene out of a Mad Max* movie. And, rightly so, it was the backdrop for the film, Beyond Thunderdome. It’s eery and vast with mounds of sand and rock piles as far at the eye can see. Coober Pedy is one of the most unusual places in Australia and perhaps the world. It’s also one of the hottest places in Australia, with summer temperatures often reaching 45°C, and ground temperatures reaching as high as 65°C.

Before white fella came into the territory, Aboriginal nomadic hunters and gatherers travelled the rugged terrain constantly in search of food and water supplies as well as to attend traditional ceremonies. In fact, the name “Coober Pedy” comes from the local Aboriginal term kupa-piti, which means “boys’ waterhole.”

The first European explorer to pass near the site of Coober Pedy was Scottish-born John McDouall Stuart in 1858, but the town was not established until after 1915, when the first opal was discovered by Wille Hutchison. Miners followed in 1916 and by 1999, there were more than 250,000 mine shaft entrances in the area. With laws in place discouraging large-scale mining  any novice with equipment and fortitude can test their luck mining for an opals. Once a license is acquired, each prospector has 165-square-foot to claim their lot.

Coober Pedy has a modest local population of about 3,500 and attracts folks from over 45 different countries. Most of them come to Coober Pedy for one thing; Opals.

Coober Pedy is renowned for its below-ground residences, called “dugouts”, which are basically mine shafts, built into homes. Some of them with elaborate interiors, large ballrooms and underground pools.

One of our favorite dugouts was the Serbian Orthodox Church. The Serbian’s came in droves to Coober Pedy to try their hand at Opal mining in the early 90’s and the church was built-in 1993. It is the town’s largest and most impressive underground church, with intricate rock-wall carvings and a gorgeous vaulted ceiling. The stained glass window provide a celestial atmosphere in the standing room only sanctuary. 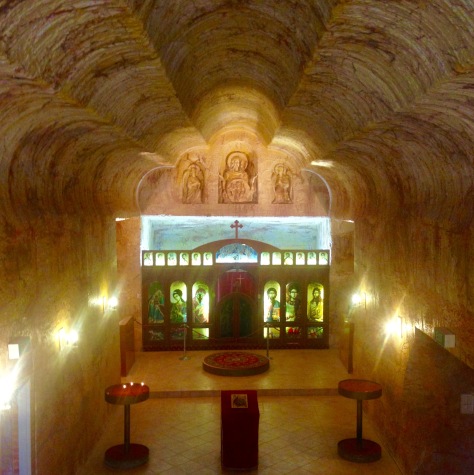 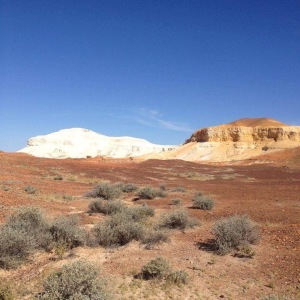 Another interesting area in Coober Pedy is “the Breakaways.” The Breakaway Reserve gets its name from the massive rocks and plateaus that from a distance look like they have “broken away” from the main range.

Our favorite was the formation known by non-aboriginal people as “salt and pepper” or the “castle”. To the Aboriginal people, they are known as the “Two Dogs (Pupa)” sitting down, one yellow dog and one white dog. To the south-west of Two Dogs is a peaked hill, known as Man (Wati) who is the owner of the dogs.

Practically speaking, the town had all the amenities that one might need when traveling through. There is a local grocery store with a decent organic section, a backpackers, camping, plenty of Air BnB’s and a few nice hotels (most of which are underground), gas to refuel, and one of the best Pizza joints in South Australia, John’s Pizza. There is even a golf course, which you have to play at night with glow in the dark golf balls. And, of course there are Opals.

Whether you are heading north to Alice Springs or south to Adelaide, Coober Pedy is the place to stop. 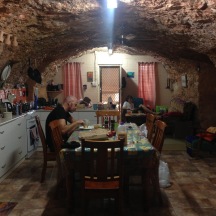 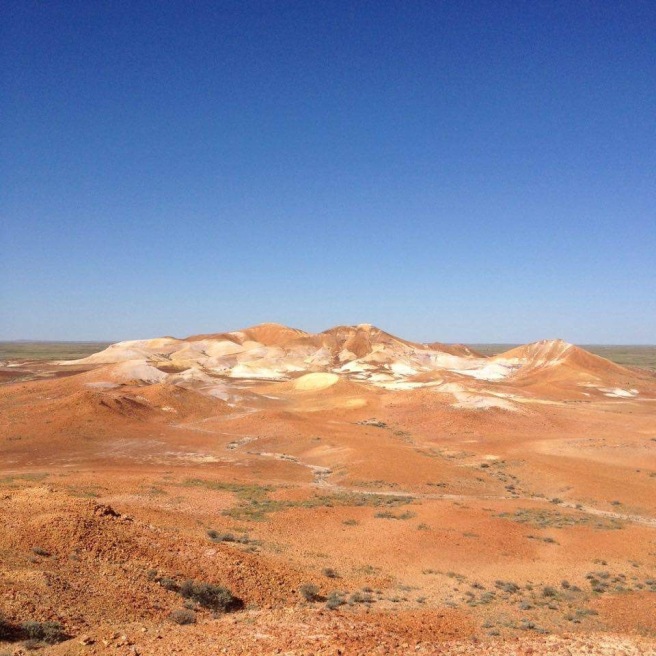 *Other major movies, filmed here on location include, Priscilla Queen of the Desert, Ground Zero, and Pitch Black.