You know how it goes for us nomads, we meet kinfolk who find out were heading towards their friends. Then we meet those people who find out our next stop is in the same town as their friends and on and on. And so it was, that we made our way from Melbourne, to Adelaide to the Dusty Feet Mob in Port Augusta.

We were in Melbourne, VIC, Australia with our friends Nick and Anita Wight. We met Nick and Anita in March of 2014 at Surrender Conference, a gathering of all sorts of kinfolk doing amazing things around the globe in their communities, from offering hospitality to refugees, to creating sustainable/recycled goods, advocating for those who are oppressed to living side by side with folks in some of the poorest parts of the world. We were excited to hear about these like-minded kinfolk and wrote Anita (who was one of the directors at the time) and asked if we could share our music or help in any other way and she said yes! And, that was that, we became fast friends and continued to stay in touch, stopping in to see the Wight family at their Footscray home on our way from here to there. 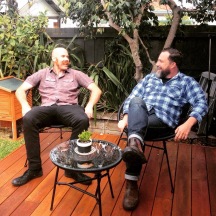 It’s an encouragement to find friends like the Wights because their friendship not only allowing us to anchor when we need a rest or re-supply but their friendship fuels our hearts with love. 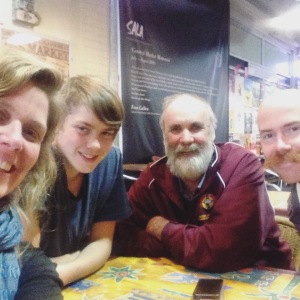 One night we were sharing a meal and talking about our upcoming trek across South Australia and up to Alice Springs, when their friend Ian Dempster called. Ian was from Adelaide and happened to in Melbourne, driving by their home on his way to a meeting. He didn’t have time to stop over but thought of them as he passed and decided to give them a quick call for a chat. While on the phone the Wights told Ian about us and our desire to come alongside and encourage others and he said, “send them my way.”

We were blessed to meet up with Ian at the Central Market for a coffee and hear about his work with the UAICC (Uniting Aboriginal and Islander Christian Congress). He shared about his passion to collaborate with and encourage his Aboriginal counterparts. Although our time with Ian was brief we shared our desire to meet and hear more of the Aboriginal story as we made our way north and he connected us with his dear friends 3 1/2 hours north in Port Augusta.

As we neared into the industrial town of  Port Augusta we experienced the vast rose-colored salt lakes, broken mesas and massive rock formations that lifted out of the ground commanding our attention and we were reminded of one of our favorite states in the US, New Mexico. Our hosts, The Wallace family, lived on a pink salt lake around the corner from the railroad and welcomed us to their Port Augusta home. They invited us to settle in, share a meal and do a load of laundry. We found them easy to connect with, specially after they whipped out the Settlers of Catan board. Then it was game on. As a bonus, Anna shared her gift of sewing with us and mended up some of our broken backpacks. 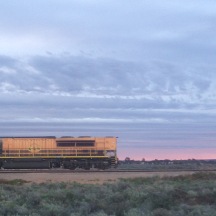 The next day, we joined the Congress Port Augusta – Uniting Church, where we met Jesse Size, Auntie* Maria and the rest of the mob*. The service was informal yet reverent. We all sat in the round, taught each other songs of praise and shared in story. They asked us questions about our travels and we shared the practical stories of how Abba cares for us along the way, making sure our needs are met, just as he cares for the birds of the air. A question was asked about how we deal with conflict and betrayal, an issue close to the Aboriginal heart. We shared the story of the betrayal and reconciliation in our own marriage.  As a legitimate victim, I shared how difficult it was to wait without bitterness or blemish, in faith, for my husband to “own his stuff” and finally how Abba liberated him from his twisted thinking; thinking that kept him bound to a false sense of justice.  As we laid down our pride and trusted, Abba did it all. Faithfully the Great Physician put our marriage back together again. We shared another song or two and said a prayer of blessing over them. It was an honor to be with these saints, to tell our hard story and the story of God’s trustworthy-ness.

Afterwards, there was a lightness in the room as folks were getting ready to move to the next part of the day, a Sunday afternoon picnic. Auntie Maria invited us to join in and explained that it was a picnic for the Dusty Feet Mob, a dance troop that her daughter, Wanita choreographed. She was excited to have us join them and for us to see the children dance.

When we arrived, Maria shared the story of the Dusty Feet Mob and explained that Port Augusta is made up of 36 different Aboriginal groups and the Dusty Feet Mob is inclusive towards them all. She stated their dance troop was created in 2014 to provide a medium for elders to pass on their knowledge to younger generations and as a way to communicate about Aboriginal issues, specifically regarding reconciliation.  The group’s debut performance was at the Peterborough Art Cultural Festival in Port Pirie and since then they have been invited to perform at the NAIDOC (National Aboriginal and Islander Day Observance Committee) Week and many other state and national events. One of their most riveting performances was alongside famed Aboriginal folk singer, Archie Roach, at the Reconciliation South Australia Event in February 2016 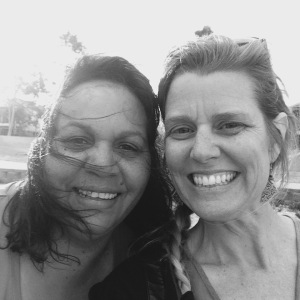 What we learned, and what we shared in Port Augusta was life-giving and inspiring. And, even more was the quiet evening that we spent in Jesse and Chelsea Size’s home, sharing a traditional Aboriginal meal of Kangaroo Tails that Auntie Maria made for us. It was during this meal, as the sun setting in the sky and heat lighting was bolting here and there that Auntie Maria shared her personal story. A story of resilience, perseverance, and faith.

Auntie Maria must have been about my age, maybe a bit older, (meaning she was probably in her early 50’s). So she would have been born during a difficult time in Australian/Aboriginal history. Her people were originally from Maralinga but had to flee thousands of Kilometer into Oak Valley, Cundalee Mission in 1955 after the British Government, along with the Australian Government, dropped an Nuclear bomb on their lands. Some went north, east and west after the bomb to find comfort. Unfortunately, some never recovered and many who have lived through the travesty still feel the effects today with sore eyes or blindness.

Many of Maria’s family were taken to Mt Margaret Mission, Kurrawang Mission or Norseman Mission and placed there under the guardianship board when they were taken from their families. This is now known as the stolen generation. Maria’s mum fled all the way to Perth where she had Maria. However, from what Maria was told her mother died when she was 3 months old. A native welfare worker contacted Maria’s extended family and her oldest sister took her under her wing with other family supporting. Maria was born a half-caste and expressed her deep desire to know her connection to country, to family especially around native titles, etc. Unfortunately, for Maria there is not a lot written about her mum so all she has to go on is what family tells her about who is family and where she fit in.

She spoke fondly of her childhood, growing up in and around Laverton, Mt Margaret and Leonora. She said she was a bit of a cheeky child, later returning to her hometown to see her name still etched into sidewalks and buildings. She said she respects and values her culture and has a deep longing to connect with country but explained that her Brother-in-law, who raised her like his own, had a strong Christian faith and for that she was thankful, for no matter what may come her way, she knows that Jesus is her rock. When all else fails, and she’s seen her share of failings, she falls back on her faith as her firm foundation. Auntie Maria’s story was so inspiring and it was an honor to even have heard a small portion of it.

*Mob is a word used to describe a tribe or family group of Aboriginal people. *Auntie or Uncle are the respectful terms to address an elder woman or man