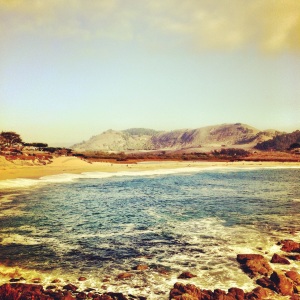 When one thinks of Carmel, California, images of surf beaches, movie stars, a playground for the elite arise, and to some extent it is.  However, there is a whole underbelly of kinfolk who live and work in this region who are desperately trying to hold on to life. There are those who work 3 jobs to pay the bills, trying to uphold the standard of the upper middle class. And, there are those who wonder the shore line without a home, looking for work and a place to lay their heads at night.

The Bajari family is part of that hidden community and they invited us into the fold, to experience the local struggles and joys, and to share their radical hospitality with us. Brian is involved in the global conversation as the executive director for Care Corp International, a NGO that specializes in trauma counseling for refugees around the world. His beautiful wife, Suzie is as a counselor for youth who have experienced extreme violence and trauma in the neighboring town of Salinas. 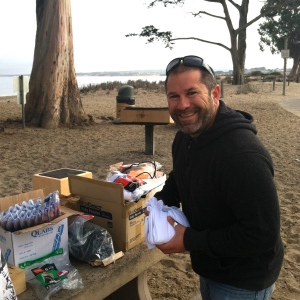 On a local level, Brian Bajari has a heart for the marginalized in his area and has made efforts over the past five years to build community amongst these weary friends and travelers.

Originally the youth paster at one of the wealthiest churches in Carmel, Brian left the secure position to engage the greater community in a conversation about humanity and what it means to care for one another. He, along with a faithful team of volunteers, build bridges with the city councils in the surrounding areas by attending meetings, they listen and they advocate for the homeless. They communicate with the area churches about drops for the homeless, places that they can bring goods and meals. They also facilitate Gathering by the Bay, which meets every weekend at 9:30am, beachside Monterey, across from the McDonalds, and is open to the public. 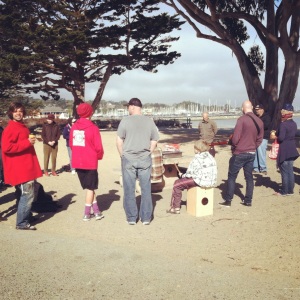 Brian leads a simple time of prayer/meditation, sharing stories from the week and an encouraging word, he opens it up for a song and at the end, they share a meal. We were invited to participate last Sunday and our time with them was precious. When we arrived there were a handful of homeless gathering around a few picnic tables on the beach. Cars with boxes of supplies, socks, sweatshirts, pants, shoes, toothbrushes, etc were unloaded. Michael and Tia brought a home made meal and by 10am the beach was filling up. A bicycle race was just finishing up and families were making their way for a day at the beach. All the while, the Gathering by the Bay continued.

We stood in a large circle, with room enough for others to enter in, if they wanted to. Passers by would stop and have a listen or sing along, engaging at all different levels.  It was humbling sharing sacred space with those who have but the shirt on their backs. The thing we were most impressed with was the authenticity of it all. Brian’s motto on caring for others, “It’s not about fixing or solving, its about being present.” And, that is what we felt when we were on the beach with them, presence. There was no agenda for outcome in the way we have seen others approach the poor or homeless. There was a trust and understanding between his crew and those that they were caring for and most importantly there was permission given to the homeless to care back.  In a results driven missions economy, this open approach was refreshing. 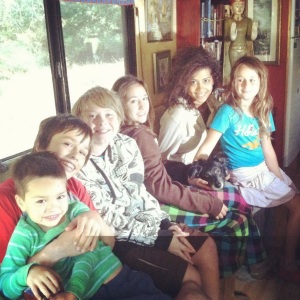 We spent a ten days with the Bajari’s, jumping right into the rhythm of their lives, sharing meals, story, and friendship. Our first night in town they welcomed us by hosting a BBQ with their neighbor Dan at the helm. We parked/plugged in our rig, just down the hill from their home on a patch of land owned by the city. All of the neighbors were welcoming. Our twelve-year-old and their twelve-year-old hit it off immediately and were inseparable the whole visit, making swords and shields for an epic battle, video gaming, playing ping-pong, boogie boarding at the beach and exploring the woods and river where they caught craw dads. The two youngest delighted us with songs and their sweet smiles. Our high schooler’s took a little longer to warm up, but once they did, it was a blast to see such a rich connection. Craig did a few handy things around the property and I was able to have, Ellis their elderly neighbor, over for afternoon tea. 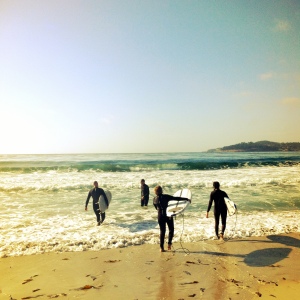 We also met Justin and Maddie who welcomed us by offering to teach us to surf, connecting us with local folkies, Anne and Pete Sibley, and putting together a fantastic bonfire on the beach for our final farewell.

Justin, who grew up in Carmel, was genuine, kind and down to earth with a passion for youth. He invited us to sit in with him at Carmel Presbyterian after we finished at the Gathering by the Bay. So, with four minutes to spare we hoped on stage and joined he and his congregation is a few songs. It was such a trip to go from one extreme to another that morning, from the homeless church on the beach to such great wealth in a bright, new building. In the end however, we’re all made of the same mud, we’re all one. What a joy to be with the Saints!

After the service, we got to chatting with British artist Simon Bull and his wife Joanna. They invited us to lunch where we engaged in fantastic discussions about the momentum in the body, about the hidden community and the faithfulness of the Lord.

We met some fantastic friends in Monterey and can’t wait to get back. Plus there is that beach thing! 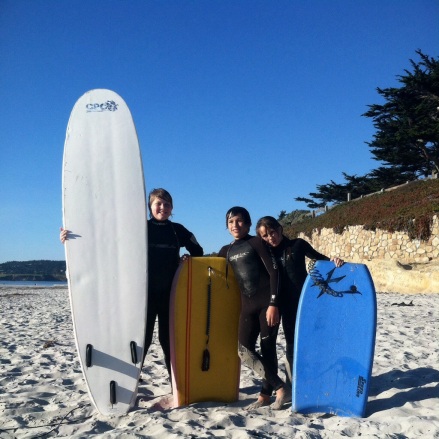 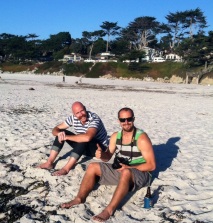 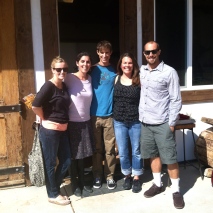 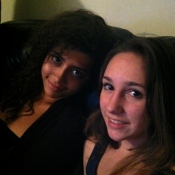 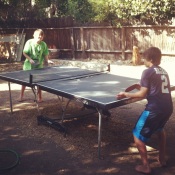 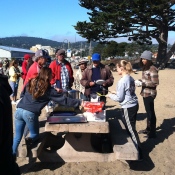 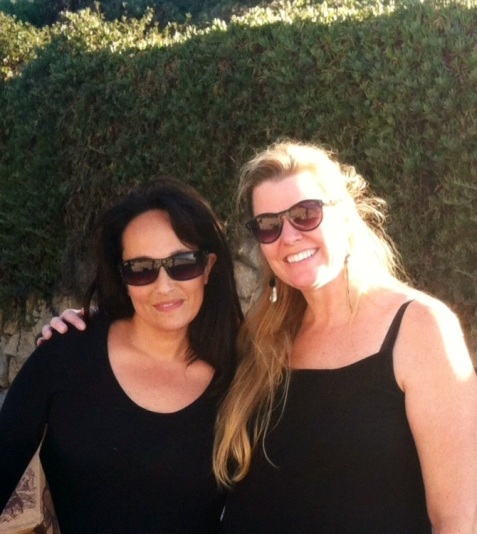 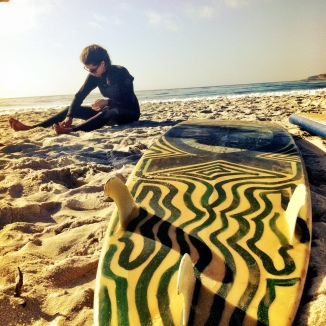 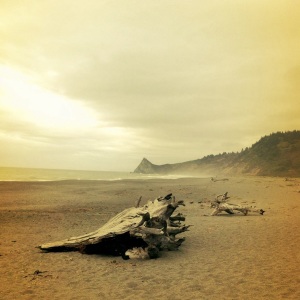 About every three months or so we have a “dream talk”, a sort of come to the table talk as a family. Our hope is to refocus, hear each other’s longings, dreams, desires and frustrations, placing them on the table and offering them up to the author of our journey.  We want to be obedient, we want to be good parents, we want to be good stewards of our finances and we want to succeed. However, this isn’t always an easy task as we each often come with different agenda’s.

Our latest table talk exposed a few twisted ideals. We found that we’ve worked so hard this summer, playing shows, releasing our third album, and toiling in the music business that we’ve drifted towards self-sufficiency rather than interdependence without even noticing. We also found that our dream talks were becoming angsty with both of our children making demands about their expectations and us feeling guilty for not meeting them as parents. Needless to say, it has been an emotionally exhausting couple of months. And, although we have seen some beautiful parts of the country, explored rock caves, beaches, forests and rivers, we have forgotten our first love. We have learned that humility is not something we have until humbling ourselves is something we do. We have been isolated much of this time and we are longing for community and purpose beyond just playing music and exploring nature. (Although, we do love both!) Ultimately, this past table talk revealed that we needed to go back to the beginning, to remember where we came from, why we made the life choice we did to swim upstream, and who the author was. We needed to lay down our pride and revisit our vision statement:

“We are The Hollands! We are a Mother, Father, Sister and Brother. Bound by blood and vision to travel about this earth, spreading a message of reconciliation through LOVE. We make our way sharing the gifts and talents given us; Music, Craftsmanship, Mentorship and Instruction, Merrymaking and Community building. Our desire is to connect with those we find along the way and encourage community and growth in relationship.”

As we make our way down the coast of California we will be connecting with our friends at New Hope Community in Oakland again. They have just experienced the tragic loss of their youth pastor, Jose. He was helping to push a car that was broken down to the side of the road when a drunk driver hit him. He was rushed to the hospital but did not make it. We are prayerful as we make our way to them and however we serve, our hope is to bring a tenderness and strength to our time with them.

The second week of October we will be serving alongside a new community in Monterey, CA. We connected with Brian Bajari through a mutual group on Facebook called The Parish Collective. (on a side note, we also met New Hope through this group.)  We are looking to meeting Brian and his community Gathering By the Bay, learning about their work with the homeless and helping any way we can. We are also keen to learn to surf and Brian has offered to introduce us to that world.

By mid-Oct we will be in San Diego with our hosts, the Penley family. We met them when we visited with our friends and their family in Colorado Springs, CO. They gave us an open invitation. My grandfather was stationed in San Diego and I have always had a fondness for the city. This will be our first time there and we are excited to neighbor with the Penley’s.

The end of October takes us to Arizona, where we will park for seven weeks and work alongside our Kineo Community in Central Phoenix. This will be our second long-term stop since we launched in 2011. Our longest was our first stop in Sister, OR where we stayed for twelve weeks, serving at Vast Church and building our bus.

We are so grateful for our Kineo community’s commitment to us and to all of those around the country who have encouraged us on our way. We are thankful for God’s amazing grace and patience. Yes, Lord, walking in the way of your laws, we wait for you; your name and renown are the desires of our hearts.