Soap-i-dy Soap-i-dy Soap! One of our favorite things to do is spend time with kinfolk who are living their dream. So, meeting and learning from the proprietors, Jonathan and Madeline, of Old Factory Aromatics was one of our highlight during our time in Texas.
In 2007, Jonathan Savoie and Madeline Novak met in Chicago IL one evening. Jonathan tells the romantic story of Madeline walking through the doors at Ravins Grin.  A friend of a friend, Madeline joined his table as she had just come from work at a local soap making company. She shared a little bit about her job and the soap making and a spark ignited in their relationship. Jonathan fell for Madeline… and her bag of soap. Over time, Jonathan began to feel a stirring to find a more creative outlet in life. He found soap making intreging and seemed to have a natural knack for creating signature blends. The more he moved towards the craft the more it felt right and the final confirmation was finding out that soap making was actually apart of his French heritage. As their relationship flourished so did the move towards the sundry business, and together, they started Old Factory Aromatics, moved to the Texas hill country along with Madeline’s sister, Emily and set up shop.
We’re glad they did! Their soaps and sundries are made with the finest organic ingredients and Jonathan’s nose for delicate combinations is excellent. And, in the French tradition each product has a fantastic story, including art work. This added touch makes their products even more special.

Their workshop is currently in Canyon Lake, TX just south of Austin but they hope to settle in Wimberley someday. In the meantime, we parked alongside them for a night, enjoying a sunset at Canyon Lake, made Red Thai Curry for dinner and later they showed us the romantically scientific process of soap making and allowed each of us to try our hand at creating a signature blend perfume. Graciana chose a blend of Vanilla, Cinnamon and Blood Orange. Banjo went for Geranium Bourbon, Cassia, Frankincense, and Rosemary. And, Jana used Oak Moss, Cypril, Pink Grapefruit, and Frankincense. It was so inspiring to see the kids really get into the creating process. The next morning we shared breakfast and said our final goodbyes. We roll on with wafts of beautiful smells and fond memories of our time at the Old Soap Factory.
Head on over to their website and get yourself some Old Factory Aromatics. 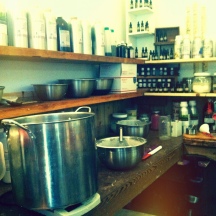 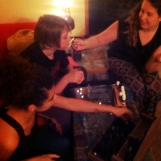 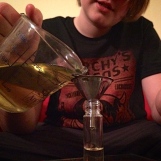 Austin, TX was the place to be late May as we celebrated our Drummer Boy’s 13th birthday. It was a celebration to be sure with all the fixings but most importantly awesome community. There are a number of precious people and families in Austin, TX who really care for us when we roll through. Many of them have children who love our son and we couldn’t have asked for a better stop to celebrate his life.

The celebration kicked off the night before the big day at our Persian friend Mehrdad’s home. We met Mehrdad last spring at a house concert that we performed and he kept in touch with us, often times sending little notes of encouragement. When we returned this time, we were so excited to see him and when he found out it was our son’s 13th birthday he was even more excited. He was so happy that he invited us to his home for a special Persian meal and to meet many in his community. The food was amazing and the conversation was even more fantastic as different folks shared their stories. We learned about the history and traditions of their Bahá’í faith, as well as, the persecution they faced in their homeland of Iran. They shared their journeys of coming to the US and gratitude for being able to live and worship peacefully now.

The next day, the BIG DAY, was full of adventure, starting off at one of our favorite Austin taco stands, Torchy’s Tacos where we met our friend Dony Wynn, who last year spent time mentoring our son, encouraging and sharing musical talents.

We fell in love with this ol’ fella after hearing his amazing story growing up in New Orleans, his time as a professional drummer in the rock and roll world, working out the meaning of life as a hermit and now finding passion in the visual arts.

From there we went to a matinée and saw the action packed Spider Man 2 and of course, enjoyed movie theater popcorn.

We concluded our festivities at Zilker Metropolitan Park, which is situated near downtown Austin. It’s a fantastic park and the home to Barton Springs watering hole.

With temps of 90 degrees we were ready to cool off in the fresh spring water. The kids went to the free side of the park and found a large tree along the bank to climb on and jump into the water.

They frolicked for about two hours and then rallied for Texas BBQ from Green Mesquite BBQ, which was just a mile down the road from the park. It was awesome! We ordered take out including a variety of meats for about $60 and everyone brought a salad/drinks to share. 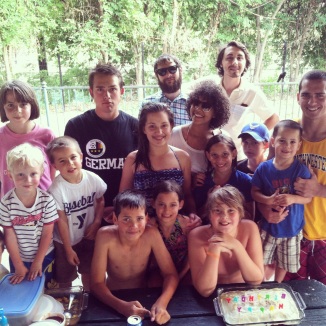 The evening wound down with a red velvet cake that the Malik family made, at our sons request and one last swim. Honestly, we could never have pulled off such a fantastic birthday without our friends, Mehrdad, Dony, The Maliks, The Heikkilas and the Newells. So thankful for community!! In the end, our Drummer Boy felt loved and appreciated. This will be one to remember! 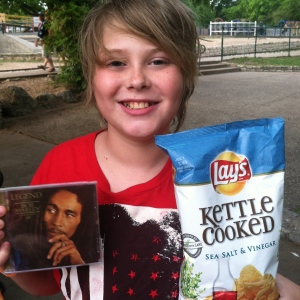 On a side note: A few months ago we asked our little Drummer Boy, what would you like for your birthday and he responded confidently and quickly, “a Bob Marley CD and a bag of chips.” What? He totally stopped us in our tracks and we all just looked at him dumbfounded. First off, we were totally expecting some expensive video game request and secondly, he had never shown interest in Reggae or anything acoustic before. I mean, he plays in our Folky/Americana acoustic based band but has always drifted towards heavier sounds. For the first time, our little dub step, metal core son was speaking our language! Who knows how and when kids pick stuff us, but the request totally cracked us up and we couldn’t resist.

The pilgrimage is sometimes just as exciting as the destination and the trek down to West Texas proved so, both for our hearts and our minds eye. First off we didn’t expect to see mountainous formations, and then there was the fine artisan world that we stumbled upon, specially when we hit Marfa, TX.  We had heard about Marfa from Dony Wynn, a fellow muso from Austin TX. He had mentioned that it’s an oasis of artists and creative types and we’d probably really like it. At the same time, we heard about Big Bend National Park and all it’s glory from fellow travelers, the Herd of Turtles. So, we decided to combine the two and make a few days of it. 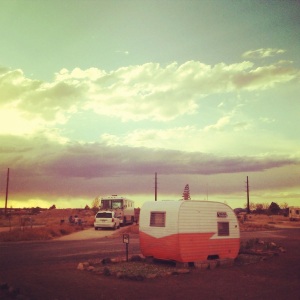 We set up camp at the Tumble Inn for $40 a night which included elec/water, showers, laundry and a sweet little picnic table. The RV park was a half a mile from Marfa’s city center and about an hour and a half from the top of Big Bend.

The fella’s planned on going down early and spending all day exploring the massive park, hiking, dipping their toes into the Rio Grand and taking pictures, while us girls stayed in Marfa and explored the little artsy town on our bicycles.

The guys day trip to Big Bend included a run down Hwy 67 through Ojinage, through Big Bend Ranch State Park, along the Rio Grande, where the fella’s may or may not have crossed the border. 🙂 Then they drove further into Big Bend National Park to the Santa Elena Canyon Trail where they hiked to the look out. From there they drove north through the park and back up to Marfa on Hwy 385. They left at 6am and were home for dinner at 7pm. All up the trip was approxomently 300 miles. 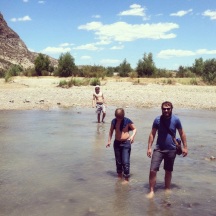 Our girls day was pretty chill. We didn’t have a big agenda and spent the morning relaxing in our bus at the Tumble Inn. We rode bikes into town for lunch at a little cafe called Squeeze. Then we rode around the neighborhoods dreaming about what it must be like to live in Marfa year round and decided that the lack of water was too much for our dry bones. We rode out to the Chinati Foundation to see 1970s, minimalist artist Donald Judd’s work, where he created giant works of art that bask beneath the vast desert skies. He’s noted as the artist that put Marfa on the map for the world of arts.

Marfa is an interesting place and the little town seemed to have two streams of consciousness. We did find that the artsy, public radio, creative folks in Marfa. However, it is also home to Fort D.A. Russel (Border Control station) and is responsible for 68 border miles between the U.S. and Mexico. The presence of Border Control was very noticeable and for some reason invoked a feeling of uneasiness in us as we peddled around the town.

At the same time we were absorbing the juxtaposition in town, the fella’s on their way home from Big Bend, were stopped at a mandatory but temporary Border Control station. They were directed to get out and allow the van to be searched. The officer told them that they were being searched because their dog sensed that they had drugs. Of course, they didn’t. Our 12 yr old was taken aback by the whole situation and bummed to find that the search dog broke his i-pad case.

When they returned and shared the story, I began to think about freedom and about the feeling of freedom.  It’s easy in these moments to take our past and present experiences, mixed with political rhetoric, a pinch of pride and become cynical. 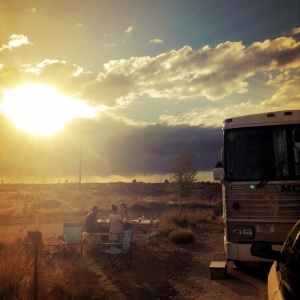 There is perspective to be found in those wide open spaces of West Texas. Looking for clarity, I see that cynicism and pride are joy stealers and the willingness to starve them will lead to compassion. Compassion is the heart of the greatest sacrifice in history and that sacrifice offers freedom. Now, hear me, I’m talking about real freedom. Freedom to love and freedom to be loved. The idea that there are people on either side of a border and that the border keeps them from really being neighbors is a reality on this earth. However, it is a difficult concept to grapple with if you are a person who longs for a reconciled world. It requires patience towards the persons on either side of the border. It requires an openness to bleed for both sides. And, most of all, a hope that the pilgrimage will lead to the destination of peace.