Most folks go to Chiang Mai, Thailand for the beauty, the many Eco Elephant safaris, the pagodas, the markets and the food but not us. No, we went to Chiang Mai to get our teeth cleaned.

2010 was our last dental appointment, so when we heard about the Chiang Mai Medical and Dental Polyclinic on Moonmuang Road from our friends and fellow travelers, Sammy and Kylie, we were stoked. We walked into the office on a Thursday and made our appointment for the following afternoon.

The next day we woke and went to our dental appointment. When we arrived we filled out a little info sheet and waited for our turns. The waiting room was packed with patients and we had to wait a bit but the facility was clean, modern and the staff was welcoming. One by one we all called in for a solid cleaning, top to bottom. At one point, I was asked into the room where our daughter was getting her cleaning and the Doctor asked if it was OK for him to replace her Mercury fillings. I had forgotten about them but was elated that he brought it up as we had wanted to get them replaced years ago but just couldn’t afford it. Of course, I said yes. All up three of us had full cleanings and Graciana had the extra work on her fillings and our total bill was $3500Tbt (98USD)! We left refreshed and so grateful for our new, fresh smiles.
Once the task at hand was complete, we were able to enjoy the rest of our time in Chiang Mai exploring the city and surrounding areas.

Chiang Mai is Thailand’s northern capital and the name means “Rose of the North.” The population is only 200,000 as compared to Bangkok’s 9 million, and so Chiang Mai offers escape from the whirlwind pace of life of its southern rival. The city was built in 1296 as a walled city surrounded by a moat. The old city was roughly 1.5km square. Whilst a good portion of the original city wall has collapsed the four corner bastions are still intact along with various other sections. The original moat is still in use to this day.

As Lonely Planet describes, “Chiang Mai is nestled amongst forested foothills and much older than it first appears. During the city’s medieval heyday, almost everything was made of teak hauled by elephant from the surrounding rainforest, with the notable exception of its towering wát. The monasteries still remain, centred on ancient brick chedi (stupas) in a remarkable range of shapes and styles, but the gaps between them have been filled in with modern Thai houses and traveller hotels.”

We stayed one night at the modest “Your House Guest House.” The price was great at $400Tbt (11UDS) but the family room we all hunkered down in, had a shared bathroom and by this point in our trip we were longing for a little bit more luxury. And honestly, Craig and I were needing a little alone time, if you know what I mean. 🙂  So we wondered the streets, poking our heads in and out of guest houses, asking for a price and availability. We were having sour luck and had resigned ourselves to the fact that we’d probably have to stay one more night at our current location. We grabbed a late dinner and while at the restaurant we struck up a conversation with our server and asked if she had and suggestions for places to stay. She sent us on to her friend’s at, Julie’s Guest House. 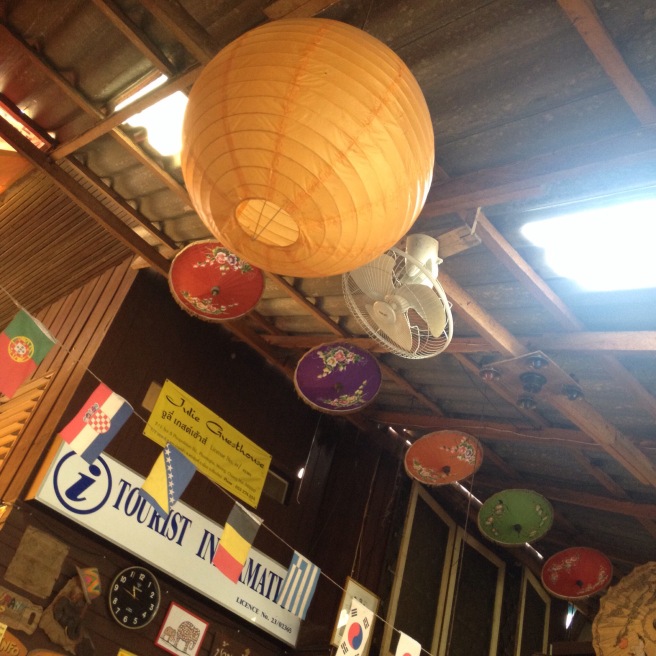 Julie’s was vibrant and full of life, with backpackers situated in ever little corner of the lounge room. There were folks from all over the world, playing pool, on media devices and chatting about what the next days adventures would bring. We were welcomed by the staff who showed us the rooms available and we were able to secure two room for a total of $650Tbt (18USD). Both rooms had their own bathroom, one of the rooms had two twin beds, which made our kids really happy and our room had a relatively comfortable double bed. It was worth a few dollars more for the autonomy and individual bathroom space. Plus we met a couple of lovely backpackers while there, which made the stay even more fulfilling.

Once our lodging was settled we rented two mopeds at $5 a day and began to explore the city. Craig mapped out a day trip that would take us up into the lush rainforest past waterfalls and end up at Wat Phrathat Doi Suthep.

We ended up stopping a few time along the way to enjoy local fare, swapping songs with some street performers, who ended up handing their guitar to Graciana so she could sing them a song. We stopped off at one point to take a short hike through the woods to a waterfall where we met and chatted with a few backpackers about what they’d discovered, sharing suggestions and local finds. Then, continued to wind our way up the mountain.

We made our way up to the Wat but once we arrived we were shocked by the number of venders in and around the Pagoda, as well as the amount of offering boxes scattered around the grounds. It’s just that we had in our heads that we were going to a place that was meant to be a sacred space and it seemed as if all that was really going on was commerce. We just weren’t expecting to be bombarded by high pressure sales people in such a fierce way and the constant stream of money being put into the offering boxes really was noticeable and made us curious as to where all that money was going, specially in light of the poverty all around us.

And, then to top it off, I aways get a little ornery when I’m told I can’t do something or go somewhere because I’m a woman, so when I saw a few signs that stated that women weren’t allowed in certain parts of the Pagoda’s, I just couldn’t bounce back and spent the rest of the afternoon a little sulky, specially after our stop just prior in Pattaya, where we learned about horrors of the sex trade industry in Thailand.

Anyway, it’s always easier to see the speck in someone else’s eye… So, I’ve worked through the immediate feelings and although I can’t say that I’ve come very far, I do see the obscene hypocrisy in my own culture, politics, religion, etc… But, that’s for another conversation, down the line.

The ride back into town was exhilarating, winding through the mountains, weaving in and out of traffic. I’m positive that the moped rides in SE Asia will always be some of our fondest memories.

We spent the evening at the night market looking for treasure, and found a few local vendors who design and make their own clothing. The items were beautiful and reflective of the mountain culture around us. The only bummer was that the sizing was all a bit small for all of us. Although, Craig did ended up getting a lovely linen shirt and fisherman shorts from a fella whose family has been making their own designs for over 40 years. The rest of us just looked but declared that if we ever came back to Chiang Mai, we’d seek out that designer to make a few items to order.

We finished off our last night in the city, visiting The Lost Book Shop and shared a lovely dinner at Bubble Live Restaurant (featuring an organic menu including, vegan and veggie options) and then topped it all off with a traditional Thai Massage. Yep, all four of us in one little parlor, you can imagine the laughs.

If there was a beach in Chiang Mai, it would probably have been pretty hard to get me to leave. The food, the people (both backpackers and locals), the sights and sounds, the rainforest, the medical resources, and the breath of fresh air that Chiang Mai offered was much-needed and we hope to get back to this part of the world again someday! 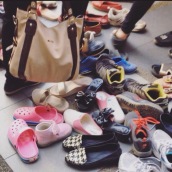